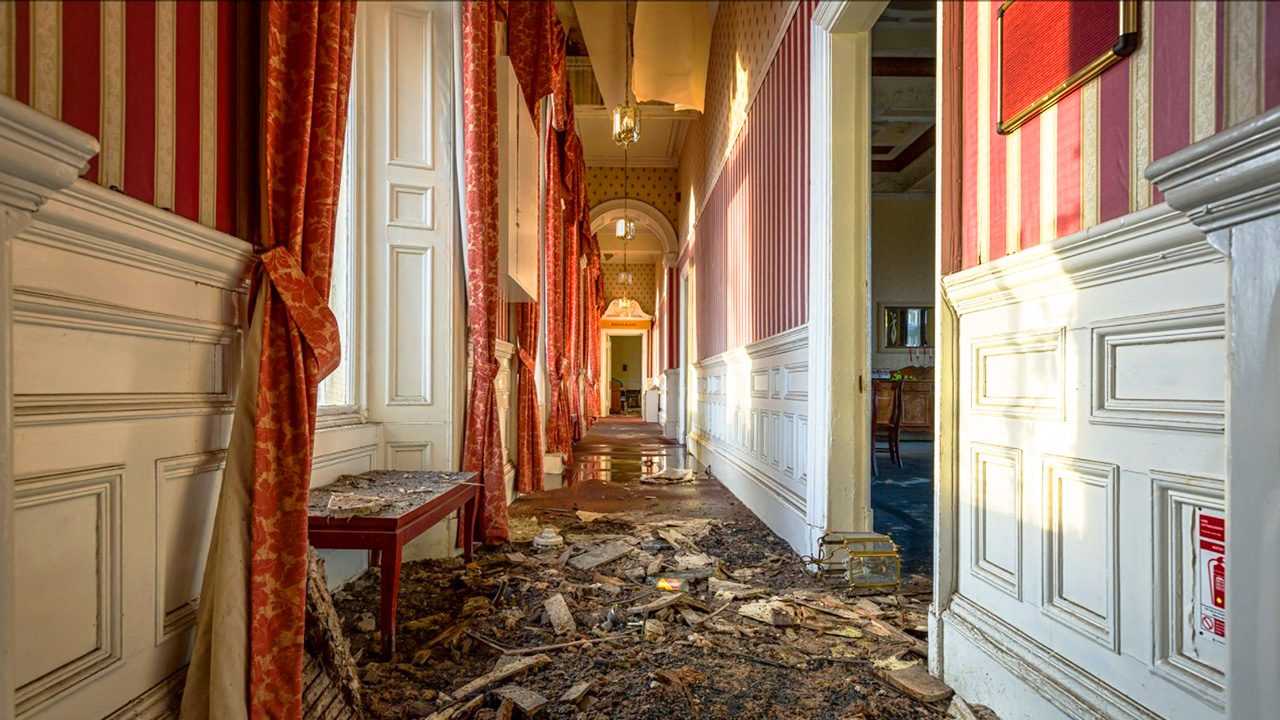 The Save Britain’s Heritage organisation has published new proposals for Ayr Station Hotel, drawn up by leading Scottish architects and costed by Quantity Surveyors.

The proposals set out a series of alternative uses which are fundable and sustainable. Previous proposals have been discounted because the neglected state of the listed buildings means that renovation cannot be a purely commercial proposition.

SAVE argues that the station hotel is a sufficiently important historic building to merit lottery investment of up to £5 million, with further finance raised from other grant giving bodies, fundraising and some commercial investment.

The report illustrates a series of tried and tested schemes for large historic buildings which have worked elsewhere in Scotland, including enterprise hubs, artists’ studios, and exhibition spaces. Further proposals include the building’s part-conversion to a destination pub, with space for events including conferences, receptions, and weddings, with hotel and hostel rooms on the upper floors.

In addition to the Station Hotel, Ayr Station itself is a listed building and therefore not a candidate for demolition and rebuilding. SAVE’s report therefore sets out various options for Network Rail and Transport Scotland, which still own part of the north wing of the Station Hotel. This would provide new passenger facilities on the ground floor of the North Wing, and potential provision of railway offices above. The report outlines a three-stage plan for taking the proposals forward, including securing the funding and planning consents needed to enable construction work to begin.

SAVE’s plans have been drawn up by architects Smith Scott Mullan Associates, with costs provided by Quantity Surveyors Hardies of Edinburgh. They are based on the £10 million estimated cost for structural repairs for the whole building supplied to South Ayrshire Council, added to the expected fit out costs for the various uses proposed. These fit out costs range from £8.47 million for Enterprise Hub and Artists’ studio use, to £8.8m for a hotel and hostel conversion.

Depending on the requirements of Network Rail/Transport Scotland, renovation of the station itself is currently estimated to cost £10 million, considerably lower than the figure of £25 million for a wholly new station cited two years ago.

Marcus Binney, executive president of SAVE Britain’s Heritage, says: “We have been encouraged to find how many comparable historic buildings in Scotland have been rescued, repaired and given the sustainable use which provides income to maintain them. Ayr Station Hotel, though neglected, is an extremely robust, well-built, and durable structure as one would expect from the noted Scottish engineer who built it. SAVE will now actively seek partners to invest in and operate the proposed uses.”

Alistair Scott, architect at Smith Scott Mullan Associates, says: “Ayr Station Hotel is a prime example of the type of building Scotland needs to invest in, if we aim to remain an attractive destination for both visitors and modern, sustainable business.”

James Knox, co-author of SAVE’s new report, says: “This breakthrough report offers a realistic road map to the restoration and re-purposing  of the Station Hotel complex. Politicians and the rail authorities must grasp this opportunity to break the current deadlock and with the help of SAVE transform the station complex into a thriving hub. SAVE has a proven track record in Ayrshire with its key role in the saving of Dumfries House and the remarkable community regeneration arising from this. Now the time has come to back their plans for the historic county town of Ayr.”
History

Ayr Station Hotel was designed by the noted Scottish engineer Andrew Galloway in an opulent French Renaissance château-style.  He was the chief engineer of the Glasgow and South Western Railway and also designed the Glaisnock Railway Viaduct at Cumnock. The hotel opened in 1885. Its 75 luxurious rooms and lavish facilities catered for an affluent clientele who spent their summer holidays on the Ayrshire coast and attended the town’s fashionable race meetings.

It is constructed in solid Ballochmyle sandstone with handsome stone detailing and is one of Scotland’s grandest station hotels.  The pavilion roofs are topped with cast-iron decorations, and the interiors boast many of the original fixtures and fittings, such as the elegant stairs, marble fireplaces and the coffered ceilings.

The exterior design is a mixture of classical and simple Renaissance style, using red freestone from Ballochmyle. The south end of the west wing is surmounted by a grand chateaux-like tower with four clock dials.  In total the hotel spans over 350 metres in length, overlooking the station platforms which are covered by an ornate iron and glass roof constructed by Messrs George Smith & Co. of Sun Foundry, Glasgow.

The Station Hotel also included Coffee and Drawing Rooms decorated and furnished by Wylie & Lochhead.  Marble, mosaic and tiles for the interiors were provided by Galbraith & Winton, Glasgow, with stained glass by J B Bennett & Sons.

The building’s special architectural and historic interest is reflected by the fact that it was listed (category B) in 1980.

SAVE Britain’s Heritage is a strong, independent voice in conservation that fights for threatened historic buildings and sustainable reuses. We stand apart from other organisations by bringing together architects, engineers, planners and investors to offer viable alternative proposals. Where necessary, and with expert advice, we take legal action to prevent major and needless losses.