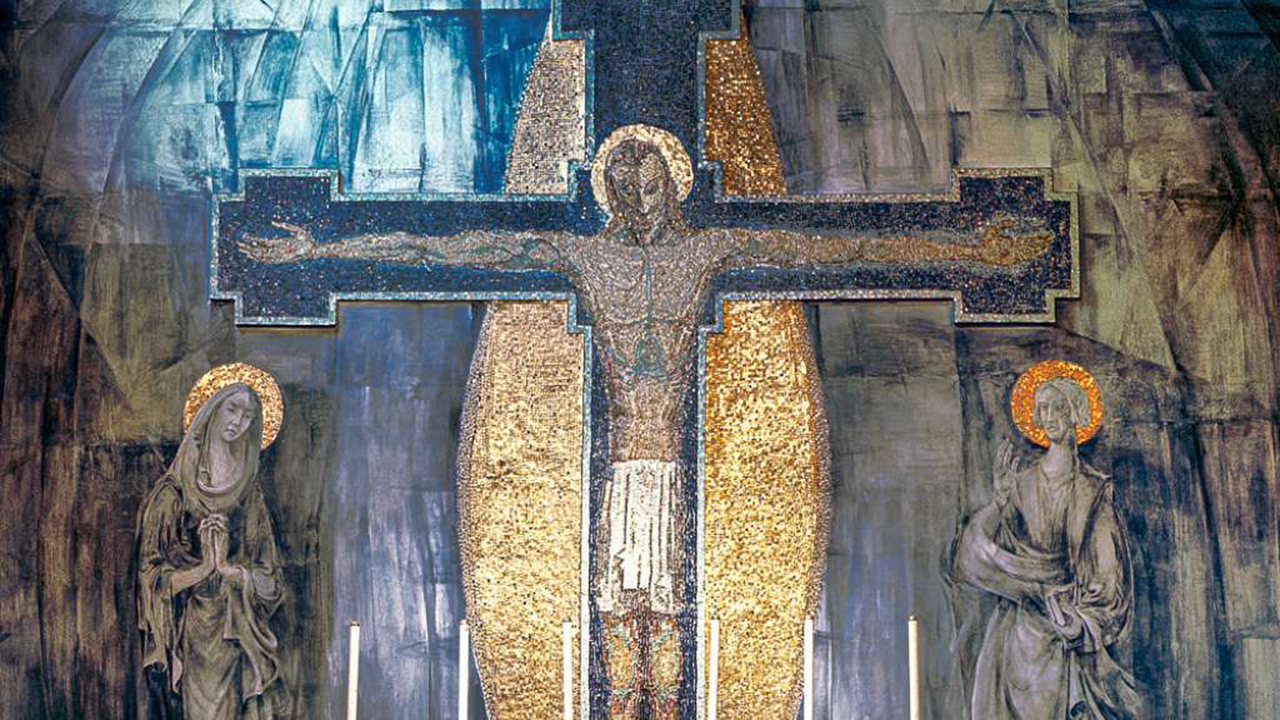 The Director of the National Gallery in London, Gabriele Finaldi, is backing the campaign to save the Oldham Mural. In a statement to SAVE Britain’s Heritage, Gabriele Finaldi states that the modern mural in the Holy Rosary Church in Oldham is, “a particularly meritorious example that brings together neo-Byzantine mosaic with a modernist Cubism-inspired aesthetic in the now covered-up surrounding frescoes.”

Finaldi describes the piece as having, “real aesthetic verve and considerable artistic invention and interest within the tradition of liturgical art. It seems entirely obvious to me that it should be preserved, preferably in situ, and ideally, serving its original purpose.”

The 1955 mural by Hungarian artist George Mayer-Marton – made up from mosaic and painted fresco – is at risk from vandalism and deterioration. It sits within the closed Church of the Holy Rosary in Oldham, under the care of the Catholic church. SAVE and many national heritage and arts organisations remain concerned about its future.

The 7.5m long mural depicts the figure of Christ in golds and tans against a dark blue cross and gold mandorla. It was commissioned following the Festival of Britain when public art came to be seen as a symbol of civic renewal and social progress.

One of only two ecclesiastical murals by Mayer-Marton that survive in situ, this is the only one that incorporates both fresco and mosaic.

The listing application, submitted in August 2020 by Nick Braithwaite, the artist’s great-nephew, and supported by SAVE is still being considered by Historic England. These latest endorsements follow statements of support last year from Tristram Hunt, director of the V & A who described the mural as a “dazzling beauty”, as well as backing from the Victoria Gallery, Liverpool, the Imperial War Museum London, and the Glynn Vivian Gallery in Swansea.

In November 2021, we received further statements from the Hungarian National Gallery and the Belvedere Gallery in Vienna.

László Baán, General Director of the Museum of Fine Arts, Hungarian National Gallery has written a statement stating: “Among Mayer-Marton’s mosaics and other wall paintings are the Crucifixion of the Holy Rosary Church in Oldham with its extraordinary technique – the combination of a Byzantine-like mosaic and a fresco – with a high art historical value. … we believe this composition gives its audience an unforgettable memory of religious emotions. It is our responsibility to preserve and transmit artistic treasures for the next generations, as in the case of this mural too.”

Harald Krejci, Chief Curator of the Belvedere, Vienna has also written in support. He states: “The muralist Georg Mayer-Marton is one of the most important personalities on the Viennese art scene in the first half of the 20th century. As a full member and later Vice President of the Hagenbund, he set important accents within the Viennese art landscape. In particular, his public commissions in England after his escape from Austria in 1938 are extremely important evidence of the cultural transfer between Hungary, Austria and England. Mayer-Marton’s testimonies are not only essential for the classification and understanding of post-war art, but also important from a socio-historical perspective. … This mural of Mayer-Marton shows at its best the cultural heritage of Viennese Art of the Klimt era and the Secession and their reflections on byzantine art and mosaic. Combined with the heritage of Viennese kinetic art and his knowledge of British Vorticism this mural is unique and outstanding and therefore needs to be preserved.”

Henrietta Billings, director of SAVE Britain’s Heritage, says: “It’s fantastic and significant that so many leading authorities on public art from the UK and Europe are publicly backing the campaign. The mural remains vulnerable and the listing application is urgent. We urge Historic England to take notice and protect this unique piece through listing. We believe the church – which is generous in size and well built – should be reused rather than demolished, with the restored mural a focal point for the community.”

Marcus Binney, executive president of SAVE Britain’s Heritage, says: “When the overpainting is removed this will be a rediscovery as exciting as a medieval church fresco revealed beneath overpainting at the Reformation.”

SAVE Britain’s Heritage is a strong, independent voice in conservation that has been fighting for threatened historic buildings and sustainable reuses since 1975. We stand apart from other organisations by bringing together architects, engineers, planners and investors to offer viable alternative proposals. Where necessary, and with expert advice, we take legal action to prevent major and needless losses.