Let it be listed: Campaign victory means Beatles cinema threatened with demolition can live ‘Abbey Ever After’!

The news is a victory for campaigning charity SAVE Britain’s Heritage and local residents’ group Love Wavertree, whose petition to retain the streamlined ‘moderne’ building quickly reached over 7,000 signatures.

Beatles experts worldwide know the Liverpool location as one of the ‘places I remember’ cited in John Lennon’s original handwritten lyrics to his classic song In My Life, a reflection on the happy hours he spent as a youth ‘in the circle of the Abbey’.

Lennon’s bandmate George Harrison was born directly opposite, and also wrote of the ‘big art deco cinema called the Abbey’ as one of his earliest memories. 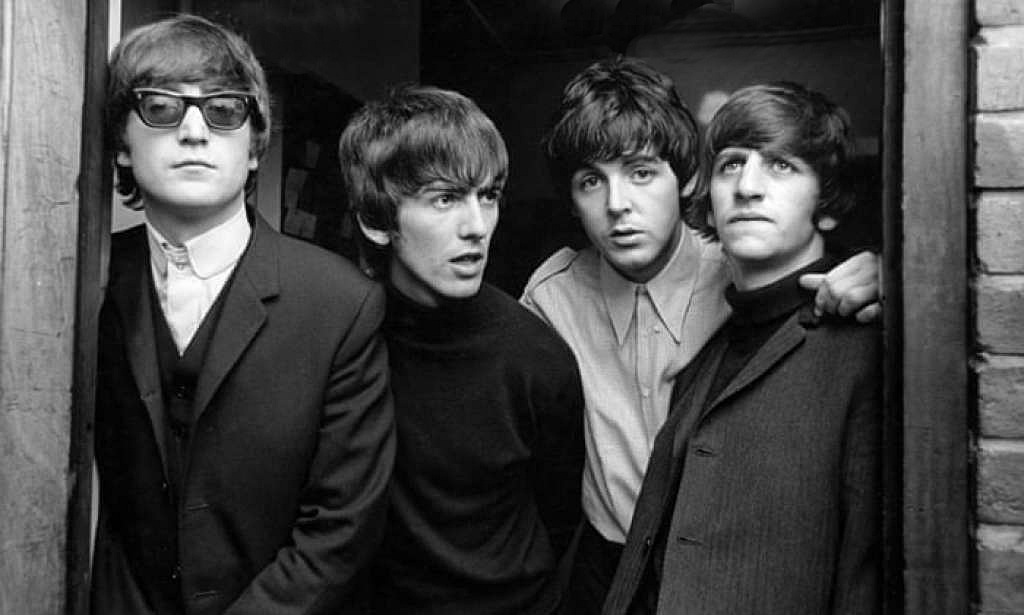 Lidl’s announcement on April 7th 2021 that the imposing brick and glass edifice would be torn down for a smaller modern store sparked outrage, with many pointing out that the existing building was architecturally important and had already been successfully converted and used a supermarket since the cinema closed in 1979.

Liverpool planning and tourism expert Jonathan Brown, who prepared the listing application for SAVE, said: “Lennon invited us to ‘Imagine’. Could Liverpool offer tourists a permanent Beatles musical spectacular like Cirque du Soleil’s ‘Love’ show in Las Vegas, which has sold out the 2,000 seat Mirage Theatre twice-daily since 2006? If so, where better to stage a UK version than the Abbey’s magnificently restored art-deco auditorium, where the Beatles actually grew up?”

Marcus Binney, executive president of SAVE Britain’s Heritage, said: “This recognition of the Abbey’s importance sets a positive precedent for Britain’s remaining interwar art deco cinemas. They are among the most beloved buildings in popular feeling, yet over two thirds have now been lost, and many of the survivors were crudely converted. Historic England’s diligent research has highlighted the diminishing stock and increasing value of these sleek and optimistic designs.”

Henrietta Billings, director of SAVE Britain’s Heritage, said “We are very grateful to the experts who supported our application, and especially to everyone who shared and signed Love Wavertree’s petition. We hope Lidl will now work with us on a design which brings out the glamour of this elegant old movie star.” 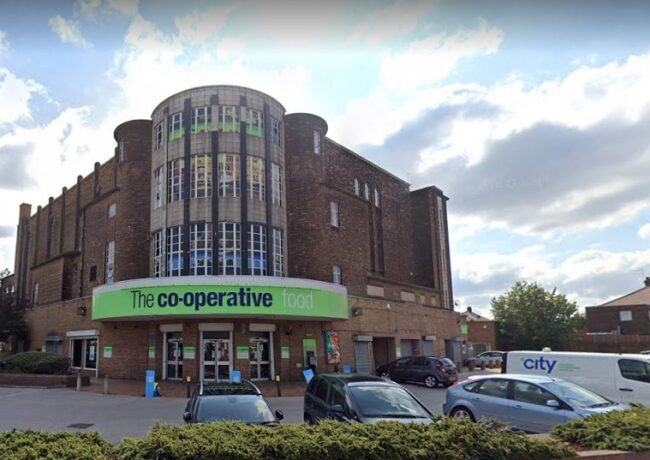 Detailed research commissioned by Historic England emphasises the cinema’s rarity as one of a dwindling number of picture palaces surviving from the golden age of cinema design and movie-going in England. The listing states that: “assessment has confirmed just how threatened these buildings are and how increasingly rare they are becoming.”

In their reasons for recommending listing at grade II, Historic England note the building’s many remaining features and sophisticated continental influences, comparing it favourably to innovative examples of late 1920s cinema architecture in Berlin such as the Titania Palast and UFA Universum, as well as the best British designs like Eltham’s Odeon in South London.

The Abbey’s architect was Birkenhead native Sir Alfred Ernest Shennan, the middle of ten children born to a successful Scottish building family. As well as designing cinema and commercial buildings, Shennan was also Liverpool’s City Council Leader when the Abbey opened and was knighted for his wartime role.

The Abbey joins two other Shennan buildings on the national heritage list, the ABC-Forum Cinema in Lime Street, and his acknowledged masterpiece, the grade II* listed Greenbank Synagogue of 1937, described as the finest of its era in Europe.

Designed in 1937 and opened in 1939, the Abbey Cinema has been a prominent historic landmark in the Wavertree Conservation Area for over 80 years, an area rich in architectural and Beatles heritage.

Despite its closure as a cinema in 1979, the Abbey has proved its flexibility by serving as a supermarket ever since, most recently as a Co-operative.

Following the Co-op’s closure in April 2020 and sale to German giant Lidl, concerns soon arose over the risk of demolition, prompting SAVE’s listing application which was submitted in August 2020.

The imposing structure is a key landmark with the Wavertree Village Conservation Area, where its striking circular corner tower overlooks the top of the High Street and an important group of nearby listed buildings, including the famous Lockup (1796) and Picton Clock (1884). 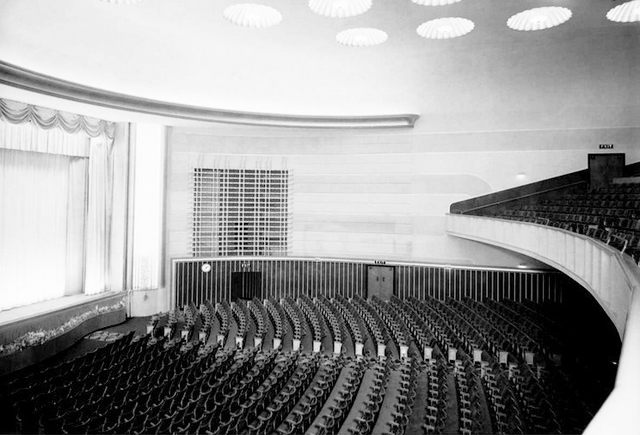 Lidl announced consultation on designs for a new store on April 7th 2021, ahead of the decision on listing from the Culture Secretary Oliver Dowden. Lidl claim their survey shows the Abbey is ‘not economically viable’ to reuse, despite it being a supermarket from 1979 until just 12 months ago. In response, SAVE have offered to fund an independent survey to explore options for retaining the building as a Lidl store, and a number of architectural practices have also stepped forward to offer creative design assistance.

With construction officially completed in early 1939, the cinema was officially opened on 4 March 1939 with a performance of Joy of Living starring Irene Dunn and Douglas Fairbanks Jr. The cinema’s striking auditorium originally seated 1,870 people – 1,126 in the ground floor stalls and 744 above in the balcony circle.

Sold to the local Bedford Cinema Group in 1943 the Abbey was later converted into a Cinerama cinema (Liverpool’s only example) in 1964 at a cost of £105,000, with a giant curved Cinerama screen installed and a new projection room constructed.

The seating was also rearranged, reducing the capacity to 1,260, and the first-floor lounge was converted into a licensed bar. Cinerama films ceased at the Abbey in 1971, and the cinema closed entirely on 4 August 1979, shortly after which time the cinema’s contents were auctioned off.

Following closure as a cinema a floor was inserted into the auditorium to enable the conversion of the ground floor into a supermarket, whilst the balcony was converted for twin cinema use and three squash courts, which were inserted at the rear of the former stage.

In the early 1980s the upper part of the auditorium and balcony were converted again for use as a bingo hall, which was opened in October 1984 by Sir Ken Dodd. The balcony was subsequently altered further for use in part as a snooker club, which along with the bingo hall closed in the early 2000s.

Continual use of the ground floor as a supermarket since 1979 finally came to an end in April upon the closure of the Co-op supermarket which had owned the site for many years.

Historic England’s report notes the importance of the Abbey’s architect Sir Alfred Ernest Shennan (1887-1959). Shennan was Birkenhead born to Scottish parents in1887 and was the fifth in a family of ten children. His father was a skilled builder who came south from Galloway and grew his business to build churches and other important buildings across the Wirral.

Alfred apprenticed for three years as a joiner and later trained as successful architect; he was the city’s youngest councillor at 32; a Magistrate at 45 and Alderman at 46, becoming Liverpool’s City Council Leader at 50 (Feb 1938) and eventually Freeman of the City and finally Knighted for his wartime civic leadership.

Shennan designed a number of Liverpool cinemas, including the Atlas Cinema on Rice Lane, Mere Lane Picture House, The Plaza at Allerton, Curzon Cinema at Old Swan, Grosvenor Cinema at Kirkdale, Granada Cinema at Dovecot, the Mayfair on Aigburth Road, many of which have since been demolished. He also carried out a 1920 conversion of the Theatre Royal on Breck Road into the Royal Super Cinema.

Shennan has two listed buildings in Liverpool to his name – Greenbank Drive Synagogue (grade II*) and the former Forum Cinema (grade II), which he designed with the noted ABC circuit architect William Glen.