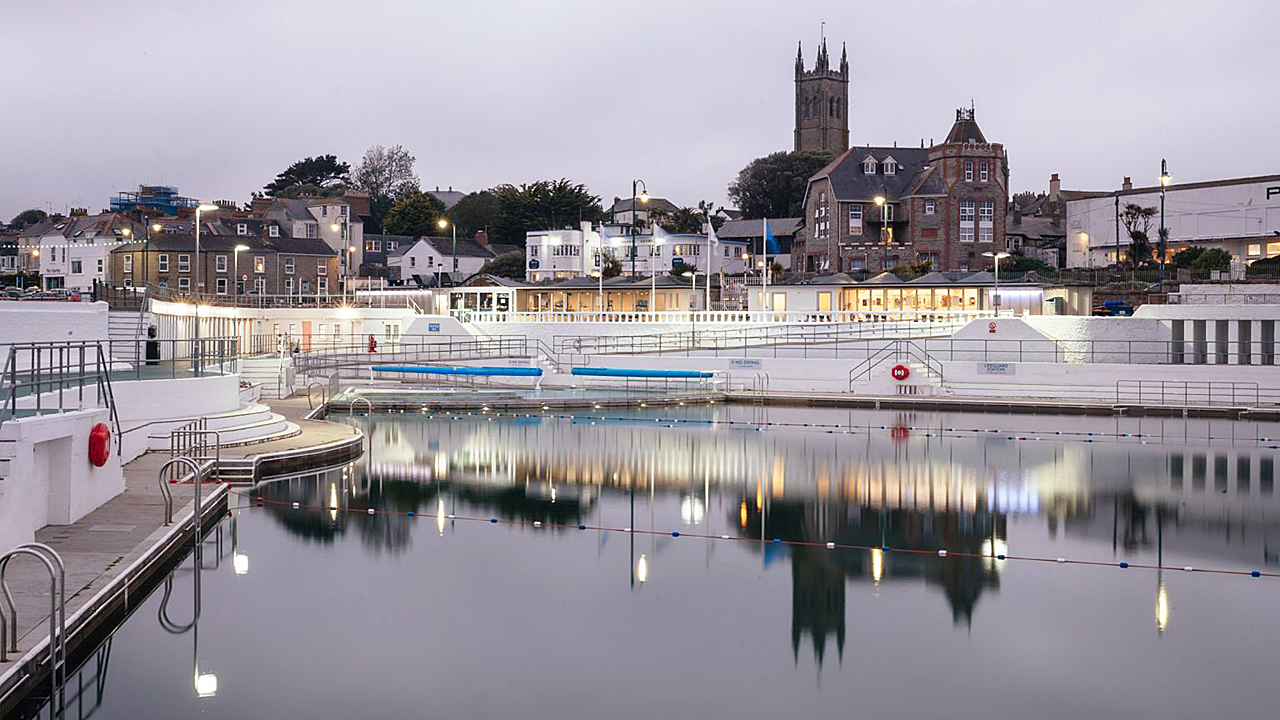 An art deco swimming pool in Cornwall has been given a new lease of life thanks to the addition of geothermal heating and community facilities designed by Scott Whitby Studio.

The Jubilee Pool in Penzance is the largest of only five seawater lidos remaining in the UK and the first to be upgraded with a geothermal borehole, which provides a natural and low-energy method of heating the water.

Scott Whitby Studio aimed to capitalise on this new addition, to create community facilities that support but don’t overshadow the building’s 1930s architecture.

The cafe and bar was extended, while a second building provides a community hall that can be used for a range of activities, from art exhibitions to fitness classes.

Glazed doors make up the facades of these buildings, allowing them to open up to a new poolside promenade.

“With a building this striking and this loved, our job was to sit back,” said architect Alex Scott Whitby.

“We didn’t want to get in the way of this incredible art deco celebration of swimming, so we created a series of modest, relatively low-cost additions that let the pool stay in the foreground,” he told Dezeen.

The project was initiated in 2014 by Friends of the Jubilee Pool, a charity formed by a group of local people concerned that their much-loved pool was falling into disrepair.

The charity bought the pool and was able to raise £1.8 million towards its refurbishment, thanks to support from Cornwall council, Penzance town council, EU funding, plus a community share of £540,000.

“The people of Penzance invested their own money and savings into the pool, even though this is one of the most deprived boroughs in the UK,” said Scott Whitby.

“It shows how important this space is to so many people, far and wide.”

The first step in the process, completed in 2019, was the excavation of the 410-metre-deep well, a project overseen by engineering firm Arup and specialist Geothermal Engineering.

The geothermal system extracts warm water from the well and, using a heat exchanger, uses it to warm the pool water up to temperature of between 30 and 35 degrees Celsius.

As a result, the pool can now be open year-round rather than just in the summer months.

The task for Scott Whitby Studio was to rejuvenate the architecture, damaged by years of coastal weather, and create facilities that could equally serve the community year-round.

Both the cafe and the community hall were designed to be as flexible as possible, so they can be used in different ways, in all weathers.

A rippled roof profile mirrors the Jubilee Pool’s historic gate signage, and also resonates with the scalloped wall of the churchyard across the street.

This form allows the building to neatly integrate north-facing rooflights, but without making the building too visible from the street. The arches seem to be peeping up over the entrance wall.

Although simple in form, these structures integrate highly durable materials and finishes.

The fibreglass cladding is the same as used in boatbuilding, while the roof is a polyurethane rubber that’s typically used for the flooring of oil tankers. The timber structure is salt-resistant, made from Douglas fir.

“This building sits under the sea wall, which is a pretty unique situation,” said Scott Whitby.

Scott Whitby is based in London, where he runs his studio and also leads the Architecture and Physical Design department at the University of East London.

His past projects include a pop-up cinema and a bedroom for a throuple, although this project has a more personal significance. His wife’s mother grew up in the area and swam in the pool in the 1950s.

“It’s been a hugely humbling process to be part of that journey with the people of Penzance,” he said.

“The best comment I had was by someone who is very local, who said, it’s very Penzance; it feels like it’s of its place, not trying to be something else.”

“We had to design a building that could cope with wind, waves, sea and a very high salt water environment, which drove a number of design decisions.”

The pool was built in 1935 to commemorate the silver jubilee of King George V. British tourism was thriving at the time, before commercial air travel led to people holidaying abroad.

Susan Stuart, who was pivotal to the fundraising campaign, believes the rejuvenated pool can be a catalyst for change in a town whose economic prospects have traditionally centred around the summer season.

“It’s wonderful to see this unique place brought back to light, not just as an affordable community amenity but a rare thing, a community driven regeneration asset,” she said.

“Year round opening and the resurgence of interest in cold water swimming is supporting ‘off-season’ growth to reduce seasonality in the local economy and bolster employment prospects for local people.”