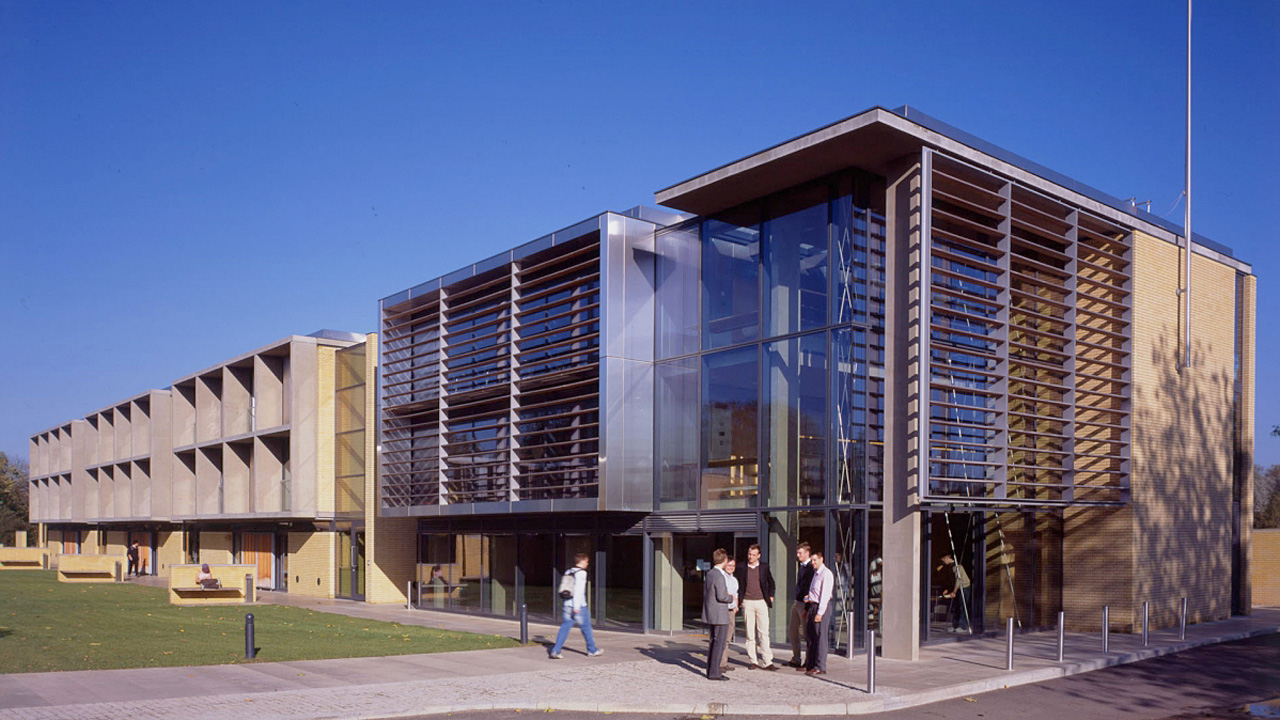 It’s funny how familiar places can suddenly take on a new significance – as an Oxford student in the mid-1980s I occasionally visited St. Catherine’s College but, like most young undergrads, spared no thought for its architecture or creator.

Nova et Vetera is the college’s motto, ‘Things both old and new’. It was built in 1962 by the radical Danish architect Arne Jacobsen. Colloquially known simply as ‘Catz’, it’s now quite rightly a Grade One listed structure and interior.

‘The music house is a plan form of two intersecting octagons, the gymnasium is a pure square, the cycle store is a cylindrical building and thus we designed the new Graduate Centre floor plan as a circle”.

Circular always presents particular challenges when it comes to buildings, but I’m sure Jacobsen would have approved. Although he was a truly groundbreaking architect, he was also responsible for a number of iconic furniture designs – including the ‘Swan’, ‘Egg’ and ‘Drop’ chairs – which in many ways defined the look and aspirations of the 60s.

His building were equally radical; some – like the Royal Danish Embassy in London, were despised by many at the time for their Brutalist and uncompromising intrusion on cherished urban landscapes. Others, like the Royal Hotel in Copenhagen, were unassuming on the outside, but were dreamlike and exquisite on the inside.

Now known rather blandly as the Radisson Collection Hotel, Jacobsen designed the building, the first skyscraper in the city, for Scandinavian Airlines System. One of the most familiar and celebrated examples of Danish modernist architecture, the Royal was Jacobsen’s gesamtkunstwerk – a project where he oversaw every aspect of the design, from the architecture to the furniture, and even the cutlery used in the original restaurant. (It’s well worth a visit ­ – the hotel underwent a comprehensive refurbishment in 2018, repairing the deconstructive damage of recent decades, and the building now recaptures much of the ambience and functionality that was the hallmark of Jacobsen’s work.)

Perhaps the most striking example of his visionary architecture was his 1929 award-winning “House of the Future”– a spiral-shaped, flat-roofed house in glass and concrete, incorporating a private garage, a boathouse and a helicopter pad. Its windows rolled down like car windows, there was a conveyor tube for the mail and the kitchen was even stocked with ready-made meals!

For me, though, St Catherine’s is Jacobsen’s magnum opus. Here again he exercised total control over ever aspect of the project, right down to the design of the lampshades, the commissioning of the wall paintings and the exterior landscaping. Nestling on the banks of the Cherwell river, the college is a striking, low slung glass and concrete structure built around a peaceful quadrangle. The more recent editions have also created a seamless visual bridge between its creator’s intentions, and modern function and expectations.

Internally its a stunning mixture of materials, and in particular the expansive dining hall is notable for its Cumberland slate floor.

Oxford has also worked its magic on Jacobsen’s original  stark, cube-like building; it hasn’t in any way become outdated and obtrusive, rather it been absorbed into the lush and carefully planned garden environment that surrounds it.

More importantly, the spacious interior is relatively uncorrupted and gives the best-surviving experience of the holistic, organic sense of light and and attention to personal human comfort that Jaconsen sought to bring to his projects.

“Proportions are what makes the old Greek temples classic in their beauty,” he once explained when asked to explain his influences.

“They are like huge blocks, from which the air has been literally hewn out between the columns.”

Externally his buildings may have been Functionalist, but Jacobsen understood that internally human spaces needed to be fluid and expansive, and designed to create a sense of sanctuary and comfort.

His other passions of painting, landscape gardening and botany also conditioned the sensitivities to colour, space and proportions that can be seen throughout his portfolio.

I’m no great admirer of Functionalism, but there’s an interplay of beauty and delicacy internally at St Catherine’s – verging on the ecclesiastical – that makes it a profoundly welcoming and reassuring place. 60 years on from its construction it’s still a very exciting, relevant and highly contemporary working space – which can’t be said for many buildings from the 1960s!