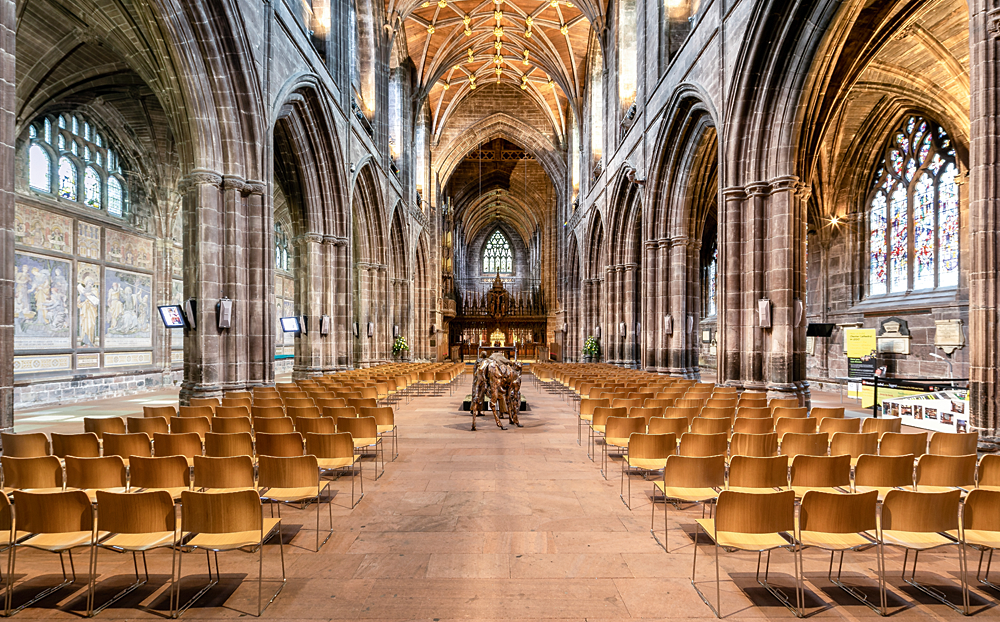 According to legend, the site of Chester Cathedral was probably the location of the Roman garrison’s Christian basilica and most likely dedicated to St Paul and St Peter. In the later Saxon period, the dedication of the chapel changed to St Werburgh, a royal princess, nun and patroness of Chester, whose remains were moved to Chester in 875.

In 1092 a Benedictine abbey was established and existed until the dissolution of the monasteries in 1540, before finally becoming a Church of England cathedral in 1541, having the last Abbot, Thomas Clarke, as its first Dean.

There is almost no trace in the present-day cathedral of Saxon heritage, however there is a great deal of evidence of the Norman Monastery, with Romanesque work in the northwest tower and north transept. The Abbey church was rebuilt in the late 13th and 14th century in the Gothic style. The base of the tower construction and the south transept date from the mid-fourteenth century and the cloisters were later rebuilt in the Tudor Perpendicular style.

The building work spanned the period until 1537. The medieval choir stalls that date from 1380 are particularly famous for their detailed figurative carving. The cathedral has significant monastic buildings including a large refectory that is now used as a café and restaurant.

The space under the unfinished south west tower became a Consistory court hearing its last case in the 1980s.

The present cathedral’s appearance is mainly due to George Gilbert Scott who instigated a restoration programme during which almost all of the exterior was refaced with sandstone from the Runcorn quarries, and roofs repaired, while in the interior stained glass was installed with marble floors and mosaics on the north wall of the nave.

During the 20th century, restoration has continued with a detached belfry in the cathedral grounds designed by George Pace, and in 2005 a new song school, built on the site of the former monks’ dormitory, was added to the cathedral. The cathedral became a Grade 1 listed building in 1955.

The cathedral is a unique place with one of the most complete sets of monastic buildings in the country, a Georgian square and series of streets, the remains of the Roman barracks and the largest open green space within the Chester city walls.

The cathedral has become the largest venue in Chester for orchestral performances, concerts, and charitable fundraisers, requiring flexible and comfortable hardwearing seating of the correct quality. This led to a decision to replace the older inflexible seating with new nave seating.

New nave seating in the form of the first 320 of the award-winning HOWE 40/4 chair, designed by David Rowland, were introduced in 2018 and were funded by the Friends of Chester Cathedral and supplied by Treske Ltd.

They are now set out regularly for different services and events and are sometimes completely cleared from the nave.

Canon Barry Wilson of Chester Cathedral said that the HOWE 40/4 chair was chosen by the cathedral community because of their beautiful design and comfort and because they are light in weight, they link easily together, they allow flexibility of layout for services and events, they can very quickly be set out or removed to the storage area by just one or two vergers and they require only a small amount of storage space as each trolley takes 40 chairs in a 1465mm stacking height.