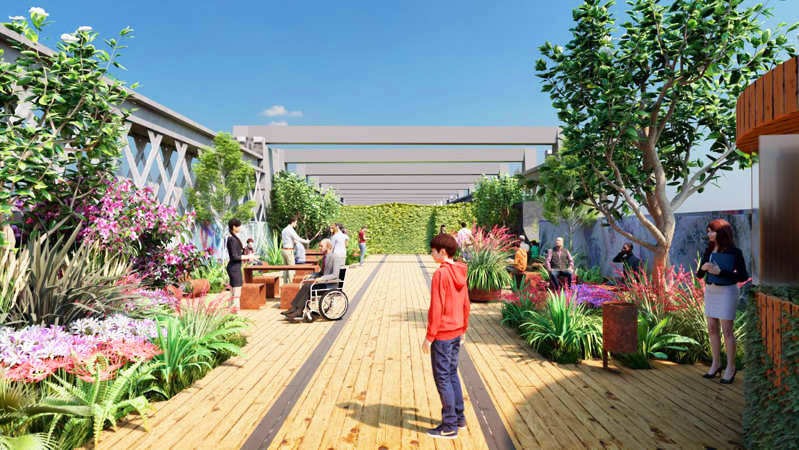 Plans to transform Manchester’s Castlefield Viaduct into an elevated urban park are under way.

The National Trust is aiming to turn the imposing 330-metre steel Grade II Listed structure into a green oasis from July.

Built in 1892 and constructed by Heenan and Froude, the engineers who worked on the famous Blackpool Tower, the viaduct was used to carry heavy rail traffic in and out of the former Manchester Central railway station.

The station closed in 1969 and the viaduct has since stood disused with National Highways undertaking essential repairs and regular maintenance to keep it safe.

The pilot phase of the project will see a green space created to stretch halfway across the elevation of the viaduct. Trees, flowers and shrubs will be planted to soften the hulking, grey steel work of the industrial structure to help attract wildlife.

When it opens for 12 months in July, some 100 people will be able to visit free each day and as part of the experience can join a guided walk on the viaduct.

A section of the viaduct will be left untouched to provide a sense of how nature has reclaimed the spaces. It will also have several new features including installations, a community space to hold events and other native planting.The National Trust also aims to capture visitors’ opinions to help determine the longer term future of the viaduct.

Hilary McGrady, the trust’s director-general, said: “This is a hugely significant moment in our plans for creating a unique green space to benefit the surrounding community and to bring more nature to people’s doorsteps. The project is also a fantastic way to celebrate our industrial heritage, bringing it to life for the 21st century.

“The pandemic showed us the importance of our local parks and gardens, but it also highlighted significant inequalities in access to green space in urban areas like Manchester.

“By working with others, we aim to increase access to parks and green spaces in, around, and near urban areas, so eventually everyone is in easy reach of quiet places for reflection with wide open skies.

“We hope that ‘greening’ the viaduct will become a stepping stone to other Manchester green spaces and nearby attractions, adding to the city’s vibrant, cultural offer.”

Costing £1.8 million, the pilot has been made possible thanks to funding raised by players of People’s Postcode Lottery, as well as public donations which will cover two thirds of the build costs.

The National Trust will also need to raise funds to support the future of Castlefield Viaduct. More details can be found by contacting giving@nationaltrust.org.uk