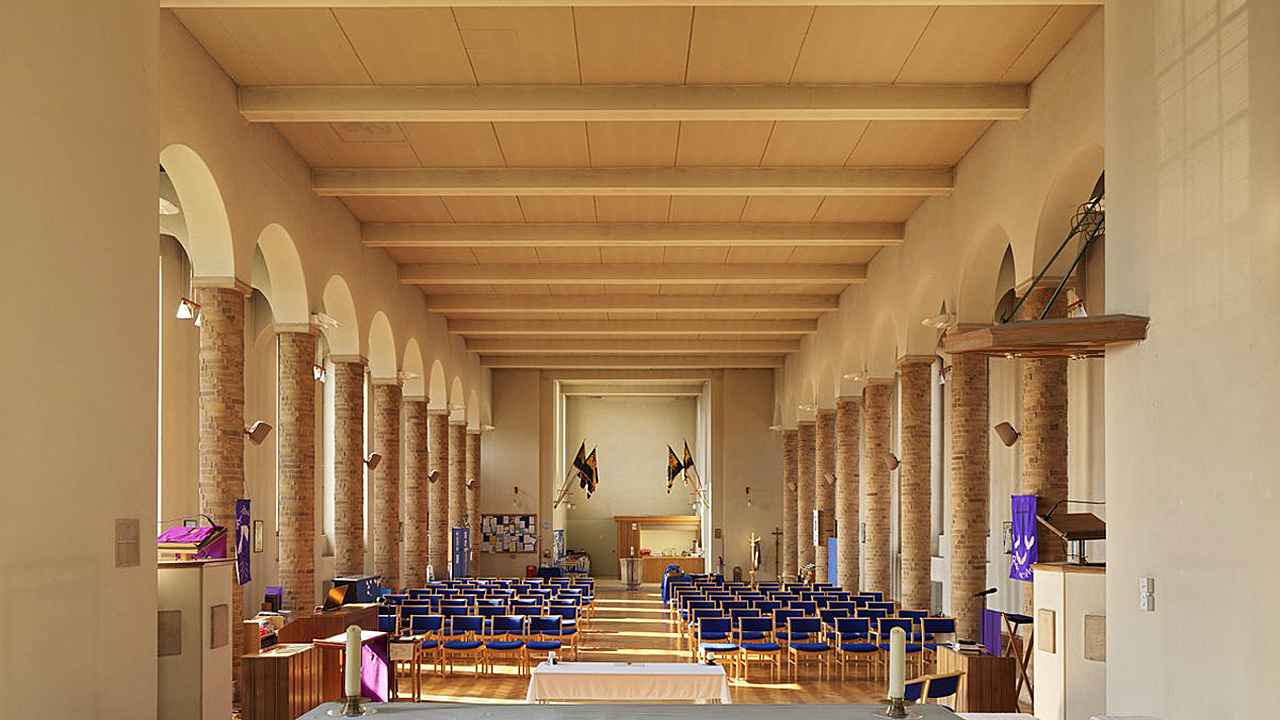 Six historic sites have been listed by the Department for Digital, Culture, Media and Sport (DCMS) on Historic England’s advice, in celebration of Her Majesty The Queen’s Platinum Jubilee.

Ranging from a theatre and an archive to a church and markers on a major motorway, the listings aim to highlight some of the many important places from Her Majesty’s reign and to reflect the important social, technical and cultural changes which have taken place over the past 70 years.

Built in 1863, the Imperial Hotel was designed by local Stroud architect Benjamin Bucknall. Inspired by Cotswold market halls and continental colonnades (which shielded pedestrians from the elements) the hotel’s design incorporated local limestone into its impressive stone masonry, most notably in the stone guttering at the eaves of the roofs.

The Hotel’s location opposite the Great Western Railway station made it a popular destination for train travellers between London and the Midlands and contributed to the area’s growing tourism industry following the railway advancements of the Industrial Revolution. In 1950 it underwent refurbishment – the same year in which Princess Elizabeth, now The Queen, visited the hotel as part of a tour of Stroud.

All Saints’ was the first church built in Birmingham after the Second World War. It is a striking design, elegant in its simplicity, named after the All Saints’ Church in Cooksey Road, Small Heath, which was completely destroyed by German bombs. It was moved from this location to Shard End due to a population migration out of the inner city and funded through money provided by the War Damage Commission.

Following its construction between 1954 and 1955, it was consecrated on All Saints’ Day, 1 November 1955. Two days later, it was visited by The Queen and The Duke of Edinburgh during a royal tour of Birmingham. The Queen is reported to have expressed her pleasure at the first achievement of the Diocesan Building Programme for the new estates.

The Queen’s Theatre was opened in 1975 by Sir Peter Hall, Director of the National Theatre. It replaced a theatre which had opened in a converted cinema building on the site in 1953, which deteriorated in the following years so needed replacement. The current theatre is a distinctive and well-designed example of 1970s theatre design and remains relatively intact. The external features are clearly influenced by the work of renowned German architect Ludwig Mies van der Rohe.

The handsome archive building, completed in 1993, was designed by noted architect Sir Colin Stansfield Smith, designer of many large-budget public schemes, in collaboration with the county archivist Rosemary Dunhill.

Local brick was used within the walls of its steel and concrete frame serving as a strong reference to the surrounding Winchester Conservation Area and the medieval City Wall remains, which lie just 66 metres away from the building. Stansfield Smith’s design used pioneering ‘thermal inertia’ building principles that allowed environmental control of archival strong rooms. These principles had yet to be fully adopted into UK archive design. In recognition of its architectural achievements, the archive was awarded a regional RIBA award in 1994.

The archive was formally opened by The Queen on 19 November 1993, during which she unveiled a wall plaque on display in the main entrance. She was accompanied by Prince Philip who commented on how the building resembled a cruise liner.

The Sun Pavilion and Colonnade were constructed in 1933 to designs by Leonard Clarke, the Borough Surveyor, as part of a £60,000 spa development scheme intended to be one of the finest in Europe.

The classical building with Art Deco details was opened by noted medic Lord Horder of Ashford and the opening ceremony was captured on film by British Pathé. The Pavilion was designed as a place to take refreshment and rest after taking exercise or after taking the spa waters in the town centre.

After a period of decline in the 1980s, the site was restored following a campaign led by a passionate local citizen Anne Smith and supported by celebrities including author James Herriot. In 1998, the Sun Pavilion was officially re-opened by Queen Elizabeth II, and in 2018 celebrations were held to mark the 20th anniversary of Her Majesty’s visit.

Construction on the M62 ended in 1970 with the completion of the final stretch through the Pennines. The new motorway opened to traffic in 1971 and became the country’s highest motorway, reaching a summit of 372 metres across the Lancashire-Yorkshire border.

It was officially opened by Queen Elizabeth, and two plaques on pyramidal marker stones were constructed in commemoration of the achievement, one on each side of the M62, which runs through the two counties.

The markers further reference the motorway’s surroundings through the use of local Pennine aggregate and stone in their construction.