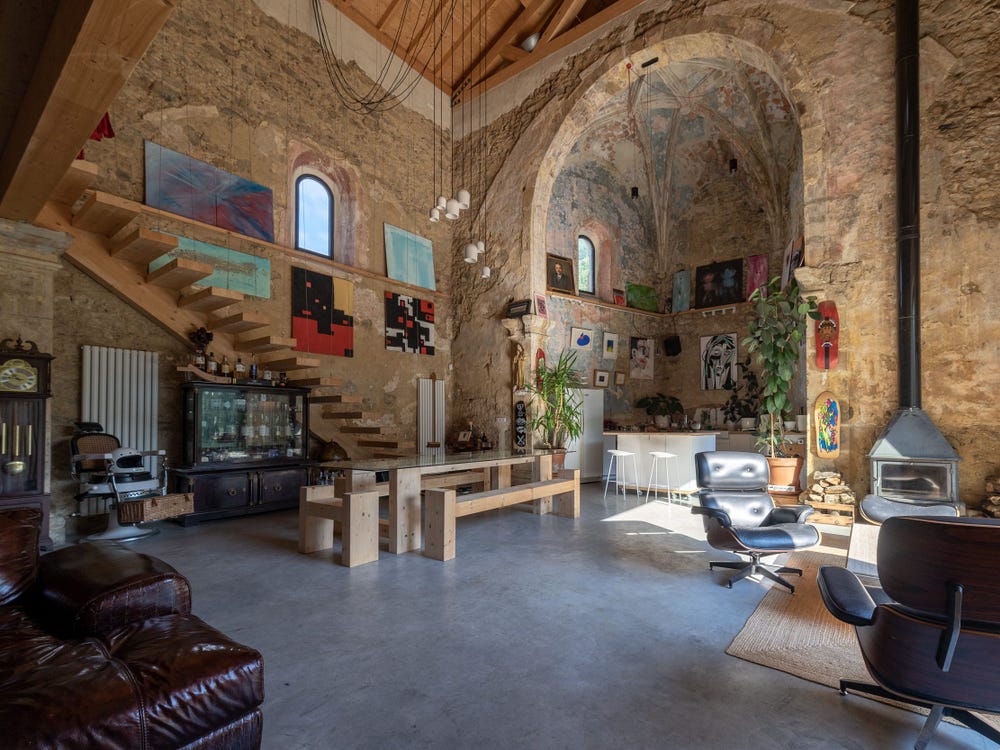 Built in 1530, a Spanish church located among the wooded hillsides of the northern Basque Country sat in near ruin until Tas Careaga happened across the building in 2016.

As an interior designer and photographer, Careaga had completed several projects before setting his sights on the abandoned church.

“I wanted to take it to the next level,” Careaga wrote on his website. “So I searched for an abandoned building for a long time. One day I saw advertised an old church in ruins and I bought it.”

Fixing up the abandoned church was a massive renovation for Careaga, so he tapped his friend and architect Carlos Garmendia to help oversee the project, Architectural Digest reported.

“[The church] is located in a valley and the access is by a small road with many curves,” Careaga told Architectural Digest. “The most beautiful thing is its location. You are literally in the middle of the mountains, with incredible views.”

The church was eventually dubbed “La Iglesia de Tas,” and Careaga chronicled that renovation on his Instagram account.

Careaga and Garmendia had their work cut out for them when they began renovating the church.

“It was completely in ruins and the roof had collapsed inside,” Garmendia told Architectural Digest. “Just the removal of rubble took several months.”

Garmendia helped redesign the roof and fix up the walls, but he made a concerted effort to keep many of the building’s original features.

“The idea was to preserve the original elements as much as possible (structure, frescoes, stone) and once everything was secured, to make design interventions that would show the juxtaposition of the new and the old,” he told the publication.

In 2019, the church was officially transformed into a three-bedroom, three-bathroom home.

A woodburning stove warms the atmospheric interior, while the master bedroom is in a two-story loft that “hangs like a treehouse” with unvarnished pine.

Additionally, a small collection of art and furnishing gathered over 10 years is included in the listing.

“The current owner has done a breath-taking job of blending renaissance and modern aesthetics, creating a thoroughly contemporary living space with an exalted and meditative atmosphere,” the website said. “This is a truly unique and extraordinary home that will captivate artists and art-lovers alike.”

The home’s kitchen was settled into the church’s former apse, an arched recess where the altar is typically kept.

Careaga decorated the space with a beautiful mix of artwork, skateboard decks, and potted plants to complement the open floor plan.

The pristine white cabinets and kitchen island add a necessary balance to the textured walls and bursts of color.

“There is everything in this home — 150-year-old pieces that belonged to my great-great-grandmother to very modern elements, including furniture that I have designed and built myself,” Careaga told Architectural Digest.

“Many other pieces are inherited (like a Roche Bobois table from my aunt). The rest are either made by me or bought second-hand. What I like the most is the ensemble — many people may find it strange, but it is very personal,” he added.

Careaga must walk up a wooded, open-tread staircase to reach the master bedroom. Around him, the plant motif was extended to above the loft and hung freely over the living room.

A circular ceiling fixture and hanging lights also draw attention to the building’s height, while the furniture and rugs help frame the open floor concept.

The master bedroom overlooks the entire home but can be hidden away with just a swish of the red curtains.

An office space fixed under a skylight is also found in the loft.

The office, with white furniture and more plants, was placed inside the loft alongside two bathrooms.

Architectural Digest reported that that church’s bell tower was added at the end of the 18th century when the building’s height was increased.

Now, the bell tower is used as a guest bedroom with an area for sleeping and space for relaxing above.

Perhaps the best feature of “La Iglesia de Tas” is the stunning view and miles of nature.

Careaga said that he and Garmendia used “untreated light wood and black metal on the outside.”

A long table fit for guests was placed outside, as well as several beanbags, firewood, plants, and a water trough.

“We wanted the edits to stand out clearly, and to contrast with the original structure,” he told Architectural Digest.