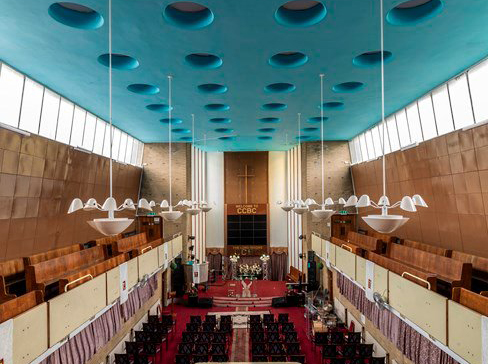 Two important historic buildings have had their listings upgraded and seven others have been “relisted” to mark their connection with the Festival of Britain, which celebrates its 70th anniversary this summer.

Christ Church in Coventry and Calvary Charismatic Baptist Church in Tower Hamlets (pictured) have been upgraded from Grade II to Grade II* by the Department for Digital, Culture, Media and Sport (DCMS) on the advice of Historic England.

Other sites, including London’s Royal Festival Hall and Barbara Hepworth’s famous Contrapuntal Forms sculpture, now in Harlow, Essex, have had their list entries updated to officially recognise their connections with the Festival.

The Festival of Britain, which ran from May to September 1951, was a national exhibition and fair promoting British design, science, technology, architecture, industry, and the arts.

Still struggling from the devastation caused by World War II, the country was in desperate need of a moral and economic boost. The Festival’s fun, colourful exploration of British ingenuity and creativity was an inspirational and optimistic look towards the brave new world of the future and helped foster a national sense of recovery.

From Cardiff to York, celebrations happened at over 2000 locations across the country. Iconic highlights from the Festival included the Dome of Discovery – which housed displays focusing on Britain’s pre-eminence in exploration, scientific discovery, weather forecasting, biological research, astronomy and outer space – the futuristic sculpture Skylon, and the Royal Festival Hall, which is still popular today.

The Festival’s legacy is the continuing success of the South Bank as a centre of culture and the arts, as well as its enduring contribution to modernism in architecture and design that can be seen across the country.

The Calvary Charismatic Baptist Church in Tower Hamlets, London (originally known as the Trinity Congregational Church) was built in the 1950s as part of the ‘live’ architectural exhibition of the Festival of Britain.

Designed by Cecil Handisyde and D Rogers Stark, the church sits around a courtyard alongside a church hall and offices.

As is common of the ‘Festival style’, the three buildings are made from brick, concrete and copper cladding, combining modernism with whimsy and Englishness. As an early example of an English non-conformist Church designed in the modern style, with recreational facilities and meeting rooms to supplement the main worship space, the site was widely renowned and became a model for subsequent churches of many denominations.

Christ Church, Coventry was designed in 1953 by Alfred H Gardner and built between 1956 and 1958. Directly inspired by the Festival of Britain, the building has a concrete frame with large areas of self-supporting brickwork, and is covered with a lightweight vaulted, copper roof.

The lavish interior is considered one of the most eclectic of its era, making it very rare. The Architects’ Journal (1953) described it as “Pleasure Gardens pastiche”, no doubt inspired by the Festival Pleasure Gardens at Battersea Park that ran alongside the South Bank exhibitions which was based on fun fairs like Copenhagen’s Tivoli.

Some of the church’s notable architectural features include the hanging birdcage light fittings, likely inspired by the Lion and Unicorn Pavilion from the Festival of Britain, whose overall form the building resembles, and the chequerboard pattern used on the window and tower that is also repeated across the walls in purple and gold.