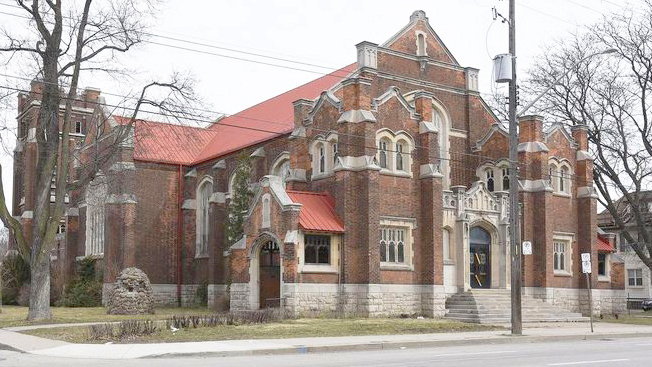 Those behind a campaign to save an iconic centrepiece of a Canadian city have had their efforts boosted by a substantial donation.

The $400,000 gift means that St. Giles United Church, Hamilton, Ontario could be saved from demolition and transformed  into a community hub. The anonymous donor has offered the funds for the adaptive reuse of the shuttered church on Main Street East at Holton Avenue South, the Friends of St. Giles say.

“Places of worship are the original community spaces, and St. Giles is so meaningful to Hamiltonians, so it’s a natural fit,” spokesperson Sarah Sheehan said in a news release Monday. “Imagine the possibilities at this beautiful building.”

Designed by Stewart & Witton, the Neo-Gothic St. Giles Church was built for a Presbyterian congregation as Hamilton expanded eastward in the early 20th century. Mass was initially held in a tent until church construction was completed. The main portions of the church were built between 1912 and 1913 including the bell tower. The bells were manufactured by the McShame Bell Foundry of Baltimore, Maryland in 1912.

In 1925, the Church voted to become part of the United Church of Canada. This was not without resistance. While 557 members voted in favour of the merger, 368 people voted against the change.

Around 1945 an addition was made to the building on the east side as a memorial to the nine church members who’d died serving in World War 2. Brownies and Girl Guide meetings were held in the church during the 1950’s as well as weekly dances. Remember, this was a time when people found the time for church.

In 1958 most of the original church was torn down and a new Christian education complex was erected.

In the 1960’s St. Giles began operating programs to better serve their community. These included a nursery school for children with learning disabilities (est. Sept. 1963), Alcoholics anonymous, sex worker drop in center and a center for physically disabled adults.

The congregations of St Giles and Centenary United churches voted to merge and in 2015 became New Vision Church. New Vision required only one church which was decided to be Cenetery United. St. Giles became idle.

Efforts to find an interested purchaser for the property had been unsuccessful.

In June of 2018 an auction was held with 528 items up for purchase including over 40 stained-glass windows. Many of these items had been classified as heritage items. LOcal firm BD Salvage bid on many of the lights, furniture, solid wood doors, etc. After the auction BD Salvage purchased the salvage rights to the remaining wooden elements.

The property owner, New Vision United Church, applied for a demolition permit in the spring of 2018. City staff and the local heritage committee found the property easily met the criteria for designation under the Ontario Heritage Act but councillors rejected the recommended designation at the behest of the property owner. The demolition application has expired and has not yet been re-submitted.

However, New Vision Church still intends to demolish the building, to be replaced with a residential complex.  Rev. Ian Sloan of New Vision declined to respond to respond to questions about the status of the St. Giles project from local media, but an emailed statement attributed to Tim Blair, CEO of UPRC, said the corporation looks forward “to hearing more about the donation” and “working collaboratively with the community.”

Friends of St. Giles say the anonymous donation will to go toward adaptive reuse of 1912 church. The partners have described the St. Giles housing plan as a way to help New Vision maintain its historic downtown sanctuary and music hall at Centenary Church next to the MacNab bus terminal.

In June, project team members told a community forum that it would take a 20- to 25-storey condo tower — with no affordable units or funds for Centenary — and an estimated $13.1 million to stabilise, restore and reuse the church while demolishing a newer wing.

But knocking down St. Giles and developing a six-storey building with lower-rise townhouses and apartments would create 80 to 100 units, 30 per cent of which would be affordable, is “financially feasible.”

The $400,000 donation, which is expected to be held in trust, could be “multiplied” by tapping into programs that involve matching or top-up funds, for instance.